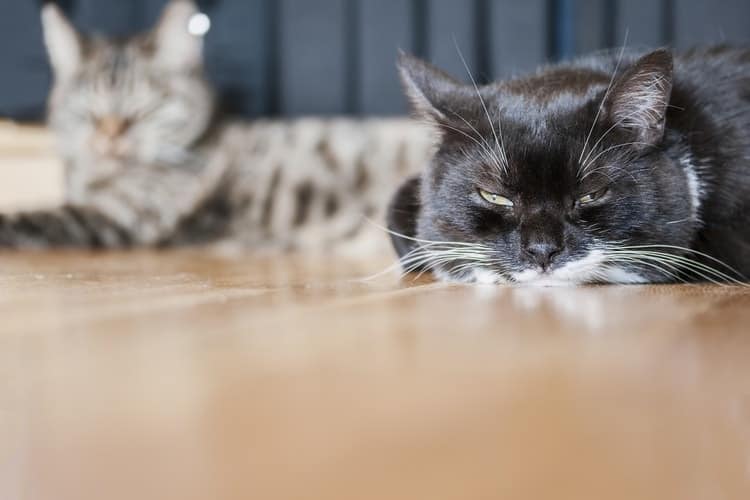 Is your cat acting out or exhibiting aggressive behavior? Cats can act out for a lot of reasons: a change in housing, bringing home a new family member, losing a family member, or even your neighbor three houses down adopting a new cat! When these stressful events occur, your cat can begin venting their disapproval by inappropriately marking, becoming aggressive, or overeating. However, there is a way to combat this problem – cat pheromone diffusers. 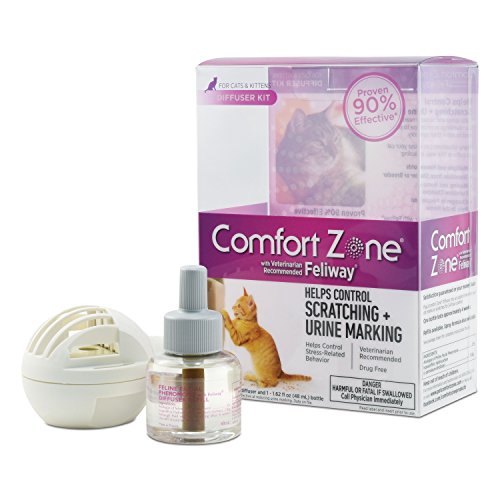 The Comfort Zone Calming Diffuser Kit for Cats features a clinically tested formula that has been proven to be 90% effective. It is designed to reduce inappropriate marking, scratching, and aggression. Unlike some of the other pheromone diffusers, this one is also completely unscented and undetectable to the human nose.

It is very common for cats to scratch and inappropriately mark when they are stressed. While cats aren’t particularly bothered by this behavior, their human companions often are. Comfort Zone Calming Diffuser Kit for Cats is designed to calm your cat by mimicking a cat’s natural soothing hormones. In a clinical environment, this product was proven to be 90% effective. For maximum effectiveness, this product should be used for at least one month. However, it is recommended that you continue to use the product if the stressful situation is still present. Results have been reported to appear in as little as one week. Because of how the hormone is designed, it can create an instant effect in many cats.

However, each cat can react to these hormones differently, and some might respond faster and better than others. While these hormones are by far the most effective on the market, some cats will not respond to them at all. For these cats, a different cat pheromone diffuser might be more effective. Because this product has the largest range of effectiveness though, we recommend that you start here.

This diffuser comes in three styles: colored, plastic, and white. You can also purchase either a single diffuser or 3 diffusers with six refills. If your cat only acts out in one location, you probably only need one diffuser. If your cat appears just to be acting out in general, it might be better to purchase the set of three and spread them around the house. Refills are extremely inexpensive at only $60 for a pack of six. That works out to approximately 10 dollars a month.

Our Runner Up Pick: Feliway Classic Starter Kit for Cats 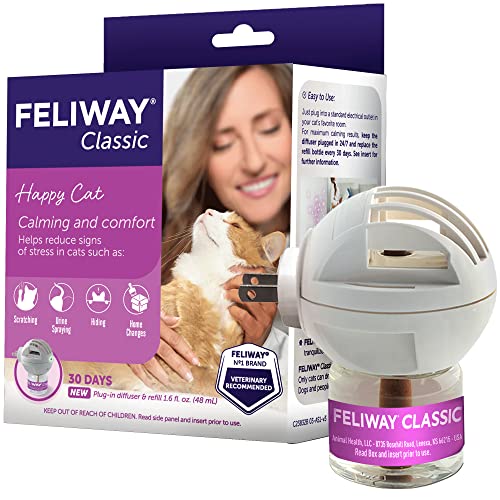 The Feliway Classic Starter Kit for Cats is an effective drug-free solution to calm your cat’s stress-induced behavior. According to the manufacturer, this diffuser is ideal for treating inappropriate marking or stress caused by boarding, environmental changes, introducing a new cat, or temporary stressful situations such as fireworks and thunderstorms. Many customers reported that it was very effective at keeping their cat calm in those situations, with results appearing in as little as one week. Some customers said that the inappropriate behavior began tapering off at one week, but took a month or two to stop completely. However, others stated that results showed up within a matter of hours. Each cat is different, and some might react differently to this diffuser than others. Remember, diffusers work better the longer you use them!

Some customers did report that this diffuser was prone to melting and starting fires. However, the company has reported that they sovled this issue with their new line of diffusers. We recommend only buying this diffuser new to ensure that you’re getting the model with updated safety measures. Refills are $15 for one, $38 for three, or $83 for six. 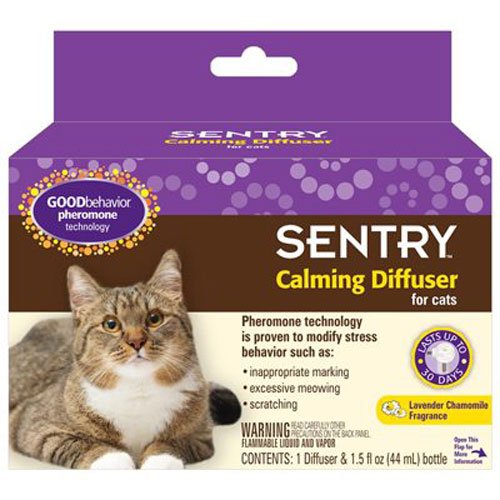 Sentry Calming Diffuser
The perfect choice for cat owners on a budget.
$42.07

If your cat is acting up, but you don’t want to pay an arm and a leg for a pheromone diffuser, then the Sentry Calming Diffuser is the perfect choice for you. This cat pheromone diffuser features key pheromones that are designed to modify stress-induced behavior like inappropriate marking, excessive meowing, and scratching. Refills are extremely inexpensive at only $18 for one. The range is smaller than most of our other top picks at only 215 square feet. But, if your cat only acts out in one room or area, this should be more than enough to stop the behavior. This diffuser does have a light lavender scent, so if you’re sensitive to perfumes and other smells, you might want to buy one of our other top picks instead. Many customers reported that the smell was not extremely strong, but some who used the diffuser in smaller areas reported that the smell built-up over time.

Because of this diffuser’s short range, we recommend buying a couple of them to ensure that your whole house is covered. If you are set on only buying one or want to test the diffuser out before making a large investment, place this diffuser in a central location and be sure that you’re keep your doors open to help the scent spread to every room. 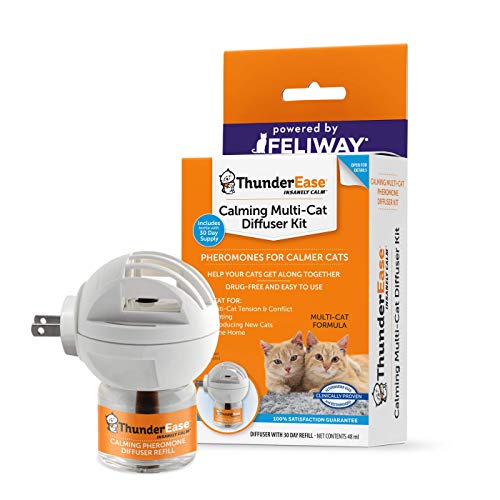 ThunderEase Multicat Calming Pheromone Diffuser Kit
If you have multiple cats in your home, this is a must-have product.
$24.99

One of the number one causes of stressful behavior in cats is the introduction of other cats into the home. Because cats are often protective of their “territory,” introducing a cat into the home can cause the existing cat to become stressed as the new cat disrupts their territory. Plus, the new cat can feel off-balanced as well as they struggle to set up their territory and safe places. As both cats struggle to figure out where their territory ends and the other begins, inappropriate marking and scratching can develop. On top of this, some cats just never get along at all! Luckily, ThunderEase Multicat Calming Pheromone Diffuser Kit was designed to combat that exact problem.

Featuring a special formulation for multicat homes, this cat pheromone diffuser reaches up to 700 feet. If your cats only gather in a couple of rooms, you might only need one diffuser until things settle down. Many customers reported that their cats tended to get into fights where they were fed. If that describes your situation, placing a diffuser only in that area might be enough to calm things down. But, if your cats have a tendency to get into fights everywhere, you should probably buy multiple diffusers to place around the house. A 180 day supply of pheromones for one diffuser is around $58, so you should definitely keep refill cost in mind when choosing which product to purchase. 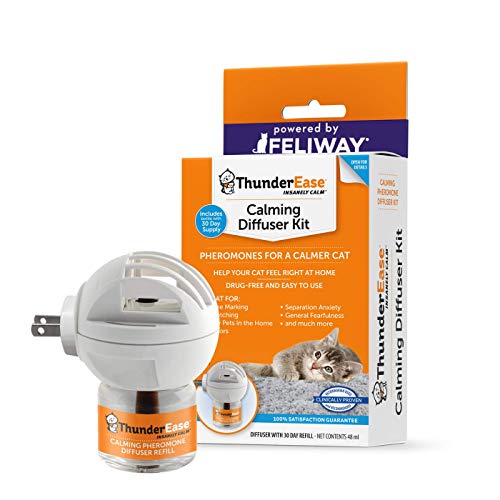 ThunderEase Cat Calming Diffuser
If your cat has been marking inappropriately, this diffuser might be the perfect option for you.
$24.99

Inappropriate urine marking is perhaps one of the most disrupting behaviors that cats exhibit when under stress. After all, while scratching might ruin furniture, urine marking ruins furniture AND smells. The ThunderEase Cat Calming Diffuser was designed to calm your cat so that troublesome behaviors such as urine marking taper out and eventually stop. Like other refills of this brand, a 180 day supply of pheromones is $60. This diffuser is particularly useful against spraying, which is more likely to be stress-induced than simple accidents outside the litter box. If you’ve ever noticed your cat spraying around your home, then this is the diffuser you need.

Like all our top picks, this diffuser mimics a cat’s natural facial hormones, which signal to your feline that the area is safe. When cats smell that the area has been marked safe, they are less likely to act aggressively or attempt to mark their territory. This diffuser covers a 700 square foot zone, which will cover multiple rooms in most houses. Of course, walls and doors will affect how and where the scent reaches certain areas, so be sure to place it in a central location where the scent can flow freely from room to room. One refill lasts approximately 30 days, though we recommend changing the refills slightly before they are supposed to run out to be sure that there is a constant pheromone present in your home. Suddenly stopping using the product can cause your cat to relapse into the old behavior, often to a greater extent than before!

Who Should Buy a Cat Pheromone Diffuser

What is a cat pheromone diffuser and how does it work?

Cat pheromone diffuser diffuses a chemical into the air that mimics a cat’s pheromones. Which pheromones a diffuser uses can differ from brand to brand, but the most common two are facial hormones and nursing hormones. Cats use the hormones in their face to mark their territory as safe. When a cat smells this pheromone, it helps them relax because they assume that the area is safe for them to be in. Nursing hormones have a similar effect. Mother cats release hormones when they are nursing their kittens to calm them and prevent them from excessively meowing, which can draw predators. These hormones can still affect cats into their adulthood.

What is a cat pheromone?

A pheromone is a type of chemical that allows members of the same species to communicate with each other. All animals have pheromones, even humans, though smelling them is usually a subconscious act and is not directly perceived. Cats can leave their pheromones in certain places through a variety of means, such as rubbing a surface with their face or marking it with urine. By doing this, they can communicate with other cats without actually having to be there and leave reminders for themselves for later.

Do pheromones work on cats?

For a pheromone to work on a cat, it must be a pheromone that cats naturally make themselves. Only pheromones that a cat has evolved to react to will cause a reaction. The exact type of reaction is dependent on exactly what pheromone it is. Still, some cats do not respond to pheromones well or at all. It really depends on their personality and the reason they’re acting out in the first place. For example, cats who are marking because of an underlying medical problem, such as a UTI for instance, are not going to stop marking when a pheromone diffuser is introduced. Because of this, it is important to take your feline to the vet to ensure that there isn’t a medical reason for their behavior.

Furthermore, just because a cat is acting out because of anxiety or stress doesn’t mean that a pheromone diffuser will provide a 100% fix. For some, pheromone diffusers are miracle products, while others don’t notice much of a difference at all. You will see this represented in the customer reviews; some customers will give a product 5 stars because it absolutely solved their cat’s behaviors, but another customer will give a product 1 star because it didn’t work for their feline. When it comes to using cat pheromone diffusers, a little experimentation is necessary.

Why Is My Dog Drinking a Lot of Water and Drooling? What Should I Do?

Question: Why is my dog drinkingRead Article

Why Is My Housebroken Dog Peeing in the House? Potty Training Questions and Solutions.

Question: Why is my housebroken dogRead Article

Should I Worry About a Black Spot On My Dog’s Gums? When Should I See a Vet? (Vet Answer)

Question: My dog has a blackRead Article

Why Are My Cats Fighting All of a Sudden? And How Do I Stop Cat Fights?