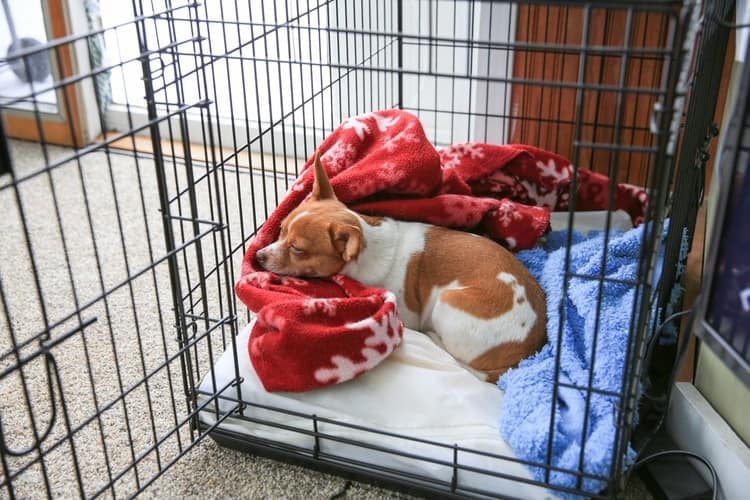 Sometimes crates are necessary for dogs – especially if your pup is untrustworthy when you’re not paying direct attention to him. You should use the crate for times when you can’t watch your dog but also work on his behavior so that you will eventually minimize his stay in the crate.

After you make the decision to crate train your dog, you may find your pup isn’t as eager as you are. In fact, a battle of wills can take place over the crate-training process. But if you stick to it, and follow a few critical tips, you may find your dog loves being in his crate more than anywhere else. Giving him a place that is 100% his may help his independence and confidence as well as your home’s cleanliness.

You want to make sure you’re getting the right size crate, or you may be setting yourself up for failure. If you’re sizing for a large-breed puppy, get a good idea of what his adult size is likely to be and buy a large dog crate with a divider to make sure he doesn’t have too much space in his crate before he reaches full size. If he has too much space, he may isolate a space for sleeping and one for messes. Measure a fully grown dog from the top of his head (or tip of clipped ears) to his toes and from his nose to his bottom, standing length. Allow 2-4 inches clearance on either measurement, and that’s the minimum size crate you want.

For dog crate options, see our lists of the Best Large Dog Crates and the Best Small Dog Crates.

You will want to decide what type of crate you want, because switching crates after he’s become accustomed to one may cause some problems later on. Most families choose a metal crate for durability and maximum visibility, but you may choose a more luxury wooden or even a plastic one. They even come in fabric for traveling, so make sure you do your homework on which will suit your needs. (Spoiler: for crate training, a metal dog crate is usually the best.)

Dogs are very social animals and they don’t like to be left alone for long. You’ll want to keep the crate in a central area so that if you’re home and he’s in the crate, he’ll still be able to see you. Even if the crate door is open, and he can come and go as he pleases, it still needs to be where you are for all waking times.

You’ll want to make any changes to the crates location gradual to prevent undue stress on your pooch. You very likely won’t want your dog’s crate to end up in your bedroom at night, but he may not tolerate being away from you in the beginning. If you start the crate training in your bedroom, start it close to the door and every couple nights, move it further from you and closer to its final destination. He’ll get accustomed to it in his normal central location easier over night if he has a transitional phase where he can see you.

You will always want to make sure your dog gets plenty of exercise before and after any period in his crate. Whether that’s an enthusiastic game of fetch in the backyard or a brisk morning walk depends on you and your schedule. You’ll want to tire him out a bit before so make those bouts of exercise at least 30-60 minutes.

Putting a dog in need of exercise into a crate is always a recipe for disaster. He may bark and disturb the neighbors, or chew on his things or he may even hurt himself trying to escape his crate. Both before and after crate time, he needs the opportunity to stretch those legs.

You want to make sure you’re not crate training too early. You can’t put a young puppy in a crate overnight. In fact, puppies under 12 weeks, you shouldn’t leave in the crate more than 30-60 minutes. Dogs that are over 17 weeks should still only spend about 5 hours at a time in their crate. You may need to schedule a lunch break home or plan for a dog walker to go to him while you’re crate training – for at least the first eight months.

Again, keep in mind the purpose of the crate isn’t to confine him while you’re gone; it’s to help you train him so his behavior is trustworthy. For example, you may use it as a management tool, to ensure your dog doesn’t bite someone and you end up embroiled in a dog bite lawsuit.

Crate training may be able to train your dog even while you’re not there. On the occasional basis, an adult dog can be crated for up to 8 hours – but that has to be the exception, not the rule. Daily confinement of this nature is detrimental to his mental well being.

You’ll want to make sure the crate feels like his. That means make sure he has his own personal touches; a blanket or bed (a dog bed sized just right for a crate) that’s specifically his, a favorite toy. You’ll likely lure him into the crate with a tasty dog treat (or reward him if he goes in on his own, at least). It’s up to you whether you leave food or water in the crate; it may not work well. He could spill or consume it all and be unable to hold it. But you want to make sure that you don’t leave him for too long without water.

You may want to add a personal touch of your own so he knows you’re still figuratively with him. The smell of one of your t-shirts may soothe him if he gets anxious and it may coax him to sleep. The idea is to transform his crate into his happy place and his comfort zone.

Pet Training Series: How to Train a Shih Tzu Puppy

Pet Training Series: How to Train a Husky Puppy

How to Discipline a Cat

You’re in bed, about to driftRead Article

Pet Training Series: How to Train a Dog

How to Train a Doberman Puppy in 4 Simple Steps

Pet Training Series: How to Train a German Shepherd Puppy

Pet Training Series: How to Train a Rottweiler Puppy

You may have heard that RottweilersRead Article

How to Discipline a Dog