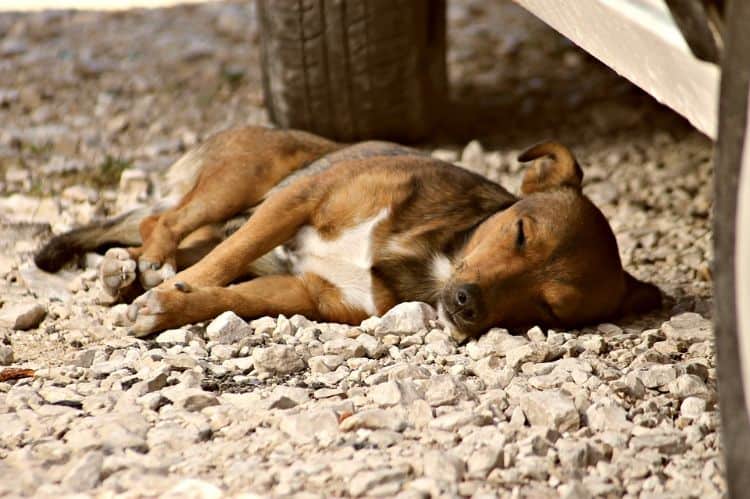 Alison Sawyer Current, an artist from Boulder, Colorado, has built clinics on the Mexican Island of Isla Mujeres that have provided free veterinary care, including 20,000 spay/neuter surgeries to local stray dogs and cats. In addition, the clinics hold the animals and find forever families for them; to date, over 2,000 pets have found their permanent homes thanks to Current’s clinics.

In 2001, Current and her husband traveled to Isla Mujeres, which is located off the coast of Cancun, Mexico, and she was shocked by all of the stray dogs and puppies that she saw. The couple decided to build a home on the island, and the animals roamed the island in packs to the point that tourists on the beach were sometimes bitten.

The Currents found out that the issue was multi-faceted: First, there were no spay/neuter programs on the island, so obtaining those services was difficult for pet owners. As the dogs bred and produced puppies, the families could not necessarily provide for them and would abandon them on the streets. Sick dogs and those with behavioral issues were also left out to fend for themselves. The government would periodically round up some of these animals and euthanize them.

In 2002, Current started up a humane society that provided spay/neuter services as well as vaccination for some of these wild pets. She was able to enlist local veterinarians to help, and gradually, the residents on the island became familiar with the program. After some time, pet owners would bring sick animals to the clinic rather than abandon them on the streets. During this time, Current would provide temporary shelter for up to 40 dogs at a time on her property while they waited for adoption. She also gave demonstrations at local schools, teaching children how to care for pets.

Nearly 20 years later, there are almost no wild dogs on the island. In fact, one veterinarian says that while there were once 14 cats and seven dogs per person, now there are 3.7 cats and 1.8 dogs per person on the island. The animals are placed with Isla Mujeres residents, as well as with people living in Mexico, the United States, and Canada. Approximately 170 pets are placed each year, getting them off of the street and allowing them the chance to live a normal and happy life.

The humane society, Isla Animals, is 100 percent funded by donations. The organization also has foster families and welcomes volunteers to help care for the animals. Those who are in the area on a long- or short-term basis can contact Isla Animals to learn about how they can help. Those living in other areas might consider donating, either as a one-time gift or on a monthly basis.

Isla Mujeres is not the only place where there has been a problem with stray dogs. In the Philippines, for example, rabies among stray dogs sometimes puts people at risk; in fact, the country ranks as the fourth-highest when it comes to human rabies deaths. The government has taken steps to try to contain and euthanize many of these dogs, but there are non-governmental agencies that help. The Philippine Animal Welfare Society (PAWS) operates a temporary shelter that rehabilitates and tries to rehome stray dogs and cats, keeping them out of the city pounds as well as off of the street.

In India, millions of stray dogs live on the streets in various cities. A few carry rabies, some are aggressive, and many are afraid of humans, making them dangerous if approached or cornered. Organizations like Help Animals India use a method called Animal Birth Control, or ABC, to sterilize dogs and then return them to the streets. While they do not find homes for these dogs, they are stopping them from breeding and perpetuating the problem. Some organizations also provide rabies vaccinations as well, minimizing the dangers of rabies to the people in a given community. This is similar to Trap-Neuter-Release, or TNR, programs in the United States, which focus on sterilizing and vaccinating stray and feral cats.

While stray dogs are not a prevalent issue in the United States and Canada, it is important for pet owners to spay or neuter their dogs in addition to having them vaccinated against rabies. Pet owners wishing to have their dogs sterilized can often find free or reduced-price services for these procedures through the ASPCA or the local Humane Society and their partners.