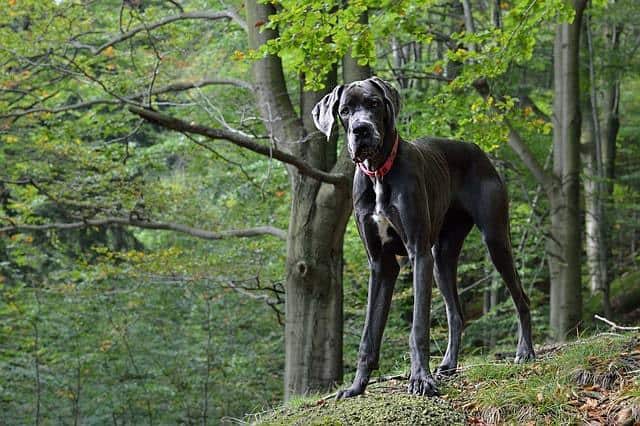 Getting in to the Guinness Book of World Records takes time. And Atlas, the Great Dane is well on his way to becoming the world’s tallest living dog. For three years now, the Seay family has been in touch with the officials to get Atlas his honor of being the tallest dog in the world. Standing at 3 feet and almost 5 inches from paws to shoulder blades, Atlas is 3 cm taller than the current world record holder.

Spencer and Jordan Seay, of Navarre, Fla., decided to find out if Atlas might just be the tallest dog in the world after numerous people commented on the dog’s size over the years. The process is a long one, and the family has been documenting and certifying the facts of Atlas’ size. With proof of videos where Atlas is walking on a flat surface, veterinarian certifications to his height, witnesses and signed statements, as well as copies of the veterinarian’s license, it’s only a matter of time.

“We had to do 20 different things, and it’s been three years,” Spencer Seay told USA Today. “We’re just waiting on them to basically confirm him at this point.” 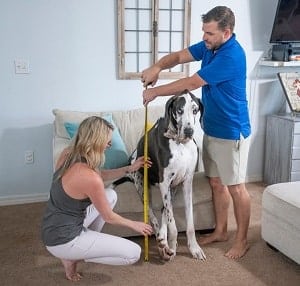 Atlas is currently 6 years old and weighs in at 225 pounds. He was originally purchased from a breeder in Missouri from the German Harlequin Great Dane. When he was just a pup, his feet were almost too big for him to walk. He’s so big, his collars, bandanas, and bow ties have to be custom-made.

“He’s been a phenomenal family dog,” Seay told USA Today. “He’ll hold down the floor the entire day. He’s very quirky, he’s the clumsiest dog. He can’t jump onto furniture. When he runs, he doesn’t separate his legs, he runs like a gazelle.”

Atlas is now considered a senior and has trouble getting up, so the Seays have to help him. Most of his weight is centered on his front legs. He also walks with a hunchback and shaky legs. But while Atlas is seen as clumsy, his family says he walks with grace and exudes a gentle grandiosity.

“I mean, he’s just our sweet dog,” Seay told USA Today. “I would say, if you’re looking for a loyal companion for the rest of their life, get a Great Dane. Do your research, know what you’re getting. But they’re the best dogs in the world, and Atlas makes our family whole.” 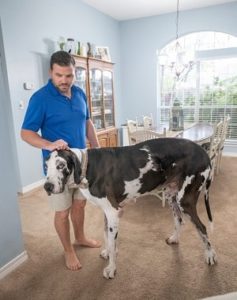 The Guinness Book of World Records is no stranger to highlighting pets. This year, a cat named Boomer takes center stage with his incredible skateboarding skills. With the ease of a human, Boomer pushes himself along with his back leg, and even stands sturdy enjoying his ride. To get in to the Guinness Book of World Records, Boomer rode his skateboard through a tunnel – a human leg tunnel made up of 13 people. And with the ease of a talented skateboarding cat, Boomer won the title of the longest human tunnel traveled through on a skateboard by a cat. It even earned him a spot on the cover of the book.

Boomer’s owner, Robert Dollwet, already has another famous cat, Didga. She made the world records as well in 2017 for the most tricks performed by a cat in one minute. She did 20 tricks in a row without a break or treat. Two talented cats in one family. 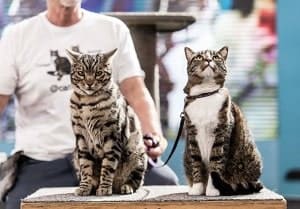 Dollwet’s not the only one with two famous cats in one household. Lauren and William Powers also have two cats in the Guinness Book of World Records. Cygnus and Arcturus, two unrelated cats, made the book in 2018. Cygnus won the title of the longest tail on a domestic living cat – his tail is longer than his entire body. Arcturus was honored with the tallest domestic living cat, measuring just over 19 inches tall. But his owners say he’s still growing.