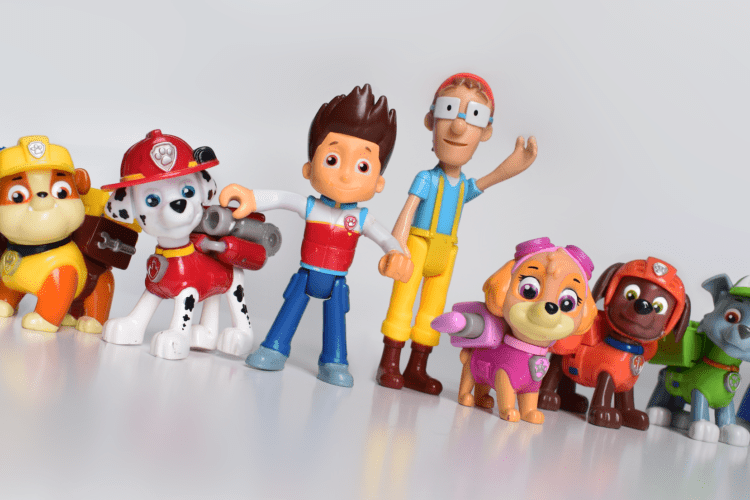 Paw Patrol took the world by storm, making parents everywhere recite catchy songs. In this cute little cartoon, canine friends get together to fight crime and rescue those in distress as a team. If your kids love this show, you might be curious about what kinds of dogs these characters play.

Most of them aren’t too hard to figure out, so your first impression is probably correct. However, if you want to make sure you know with 100% certainty, we’re here to clear up any confusion!

Chase is the 2nd member of the team—acting as the police and traffic cop dog.

Chase is the pack leader—a wise German Shepherd that meets tons of hurdles and calls all the shots. Sure, he runs into snags along the way, but he’s prepared to deal with any challenge with the help of his trusty team.

These canines are protective, obedient, easily trainable, and discerning as family dogs. Because of their high activity levels, they require a lifestyle where they can release their pent-up energy and have a task to perform.

Rubble is the 6th main character in the Paw Patrol Series.

Rubble is an adorable chubby Old English Bulldog. He is the construction pup in charge of all the buildings. He absolutely loves skateboarding and snowboarding in his downtime and loves helping the crew.

So, what are Old English Bulldogs like in real life? These muscle-y little brutes are generally happy-go-lucky and goofy little clowns. Most of them don’t recognize their size and can be bulldozers.

English Bulldogs make excellent family pets because they are amiable and do very well with children.

Rocky is the 5th pup on the team, lending his expertise in recycling and ecology.

Rocky doesn’t have a specific breed, as he has a delightful combination of several different ones. We really like this character because it sheds light on how mixed breeds are just as fabulous and valuable as any other purebred dog could be.

Hopefully, having characters like this and children’s shows will encourage families to adopt instead of buying from breeders.

Mixed breed dogs are everywhere you look. You can find them in shelters, online from private owners, and other places. Mixed breeds can look like a combination of literally any dog breed you can think of.

Interestingly, you can have two very different-looking parents produce puppies with a variety of sizes, colors, appearances, and personalities.

Skye was the first female member on the team—and the 4th crew member in line. She is a real pro in aviation.

Skye is a cute little spunky-hearted Cockapoo. You might recognize her with her beautiful pink get-up and wide-eyed expression, ready to tackle on the next flight.

We really love Skye because she is a mixture of two breeds, the Cocker Spaniel and Poodle. While this has become quite a popular hybrid breed, not many dogs in movies display that designer dog element.

Cockapoos are typically clever and alert dogs who make fantastic family companions. They generally have longer curly fur that needs regular brushing to avoid mats and tangles. The Cockapoo requires a lot of mental stimulation and physical exercise.

So, they make very good pets for growing families or people with active lifestyles. A well-trained Cockapoo might even do well in a situation with seniors, permitting they weren’t too high energy.

Everest was the 7th puppy added to the paw patrol team. This spunky girl is the snow mountain rescue pup, getting through harsh cold climates to save the day.

This little girl knows her stuff, and she mimics the curious, peppy nature of the Siberian Husky. She is always gaga over her owner Jake and loves helping those in need.

Siberian Huskies are snow dogs at heart. These dogs were originally working as sled dogs to cart people through harsh snows. Everything about them is tailored for extreme climates–their attitudes, hardiness, and insulated double coats.

But they have grown in popularity and can be found in hot and cold climates these days. People love the Huskies because they are clownish and adventurous.

Zuma is the 7th member of the Paw Patrol team, and he specializes in aquatic rescue—fitting, considering labs love the water!

If the pups are ever in trouble and need a team member that can cut through the waters, Zuma is there a pic. This energetic boy gets the job done every time.

Labrador Retrievers are among the most popular breed choices the world over. They are amiable, energetic, and good with people of all ages. It’s really no wonder, as these dogs are the perfect family addition.

These dogs are medium to large and relatively plentiful. You won’t have any trouble locating a lab or lab mix whether you search for a breeder or online through different rescue services. Labs are fantastic in the water, having webbed feet that help them swim—just like Zuma!

Classically and appropriately, Marshall is the flame-fighting Dalmatian of the group. He is responsible for putting out fires and teaching safety.

This clumsy pooch is a sweet, dopey doggy with good intentions.

Dalmatians have declined in popularity slightly, but they have really made American history. Not only did Disney make Dalmatians popular with the hit movie 101 Dalmatians, but they were also the prime firehouse dog, symbolizing fire departments across the United States.

Dalmatians are energetic, loyal dogs with beautiful spotted markings of black and white. The loud whistles wouldn’t disturb them as much as other sensitive canines. It is definitely not uncommon for one of these dogs to be deaf, which was another draw in landing the role of the firehouse dog.

Tracker is the 11th member of the Paw Patrol team and works as a jungle rescue pup.

He is eager and ready to help out whenever they have to delve into the jungle for a rescue. His personality is chipper and spry, much like real chihuahuas.

The Chihuahua has really had the limelight in movies and culture. This Mexican breed is one of the most popular small breeds of all. These dogs can be pretty independent and stubborn.

They also might have a little dog syndrome, wanting to take on everybody around them. It is very typical of them to be fiery and even sometimes aggressive.

Robo Dog might not be a real dog, but he’s still a big part of the show! He doesn’t have many tasks other than driving the PAW patroller—which is pretty darn important.

You can find robotic dogs in stores and online that can learn tricks!

What Does Paw Patrol Teach?

Paw Patrol originally starred six rescue pups (with team numbers increasing over the seasons) with their own special place in the pack. They use their talents to assist the community in solving problems and making better situations. It teaches children to brainstorm and come together to create solutions positively.

Paw Patrol is a popular kids’ show for ages three and up. It doesn’t have a lot of educational content about learning the alphabet, mathematics, and other lessons, but it does teach lots about teamwork and roles in social groups.

They see each job take on their role, and kids can be encouraged to use their own unique talents going forward and in their own lives.

This show is excellent for everyday entertainment, but if you want your kids to learn specific life lessons such as gender and race diversity, educational teachings, and moral lessons, this isn’t a show that touches on those elements.

The busy pups from Paw Patrol are all different and unique in their own right, having diverse talents and strengths. Each dog has its role on a team, helping his best buds save the day.

If anything, this can encourage our children to learn to resolve differences and find solutions despite chaos and turmoil.

Are Jade Plants Toxic to Dogs? What Do I Do If They Eat One?

Are Fiddle Leaf Figs Toxic to Dogs? What Do I Do if They Eat One?

Are Dracaena Toxic to Cats? What Do I Do If They Eat One?

If you notice that your catRead Article

Are Olives Bad for Dogs? What Do I Do If They Eat One?

Olives can be enjoyed in soRead Article